I’m expecting two killer albums from two incredible bands this year.  What do these bands have in common?  Well, almost nothing I guess.  (It’s 11 whole steps at BandToBand.com!) They’re both punk bands, but they really sound nothing alike.  They are, however, in my all-time top favorites.

My wife tells me all the time that every band that I talk about is my favorite.  But that’s how I am, I guess.  If I like a band, I really like a band.  I try to acquire all of their music.  I get into side projects & related bands.  I sometimes even look for live stuff & bootlegs.  Snuff & Ann Beretta are bands that have that hold over me.

I got into both of these bands right around the time I started playing in my first real band, AiXeLsyD.  I was really into buying punk compilations some time after 1995… and whenever ’98 or ’99 rolled around and AiXeLsyD was writing and playing shows, I was absorbing everything and these bands just lit me up. 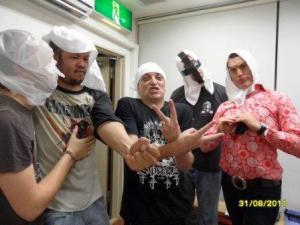 I had purchased Fat Music Vol. II: Survival Of The Fattest for the Me First and the Gimme Gimmes cover of “Country Roads”, and was instantly drawn to Snuff’s “Walk” & “Nick Northern”.  I’ve blogged about them before.  I was hooked immediately.  They really blend pop, punk, metal, thrash, ska, soul, & anything else they feel like at the moment absolutely seamlessly.  It’s crazy.  One minute they’re blistering through riffs that could be on a Metallica album, and the next there’s horns or an organ or they’re covering the specials and there’s no “what happened?” feeling.  It’s just natural.

Snuff has been dropping updates via their Facebook Page, and it’s all great news so far…

Happy new year to all. UK tour in april and new songs on the way. oi oi

I’m incredibly pumped for this, or anything that Duncan Redmonds puts out. 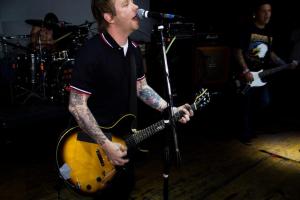 With Ann Beretta, I can pin it all down to one song.  I heard “Bottlecaps” on  Fueled by Ramen‘s Year of the Rat comp, and that was it.  These cats are incredible.  Hearing their songs is like being dropped right into the middle of a story, situation, or town that you know every inch of despite having never been there.  I’ve seen them more than once in the ‘Burgh, and have even road-tripped to Cleveland to see them.  I helped make buttons for them, and they crashed at my buddy (& fellow AiXelsyD bandmate) Andy’s place after a show one time at the Rex.  The music is not unlike Rancid… without so much ska & snarl, but with honest Willie Nelson-like storytelling.  These guys wear RVA on their sleeve, and certainly make their hometown proud.  Their cover of All‘s “Long Distance” is incredible.  (The original is of course flawless in its own right.) “Love’s Easy Tears” is one of the catchiest songs ever, and I love the chaotic ending.  “Russ’Song” always gets me going, too.  Inquisition, Sixer and Foundation are worth checking out too.

The major update on this front comes from the driving force behind Ann Beretta and Foundation, Rob Huddleston…. via Twitter:

Get it before it disappears!

Drums for 8 songs tracked so far with @RobHuddlestonVA of Ann Beretta. 5 so or more over the next few days. Go like their new FB page www.facebook.com/AnnBeretta

Back in the studio today!

First round of mixing begins today!

3 months of bronchitis & finally back to the studio w Pedro Aida – Producer/Engineer/Songwriter to get back to some vocal tracks.

What do you think about Snuff & Ann Beretta?

What music are you looking forward to in 2012?

7 thoughts on “New music from Snuff and Ann Beretta!”

Someone from a Dad's group on FB found a solution. You out there in Instagram land? Tag yourself!
#DadFlex.
Molly's dance photo proofs!
So, I followed the website and found the @roedainc IG account.
I just had someone send me an email and ask for a solution to this old maze posted on my blog in 2012.
#HappyMothersDay!
It was a nice day!
When your daughter likes to put PJ's on at 4:00pm.
Happy Mother's Day to everyone out there taking care of it all day-to-day to raise your families!
For real.
Dose 𝘥𝘰𝘴 in the books. Ready to open back up.
Gonna need this. 🤘