This is why Qdoba is awesome. I’m just sayin’.

Instead of annoying the fish and shellfish-allergic masses* by adding deathfish to your menu where it wasn’t previously… they have decided to focus on selling something that they already have on the menu that also will not send you to eternal damnation.

I get the not eating meat thing, and giving things up… and it’s cool that you observe that and don’t cave in the face of rumors that the whole thing was set up by a corrupt pope taking money from fishermen in exchange for boosting their sales.

Let’s make Lent about reflection through sacrifice… not about where you can get a good deal on anaphylaxis-enducing sea bugs.

This was in my inbox today… 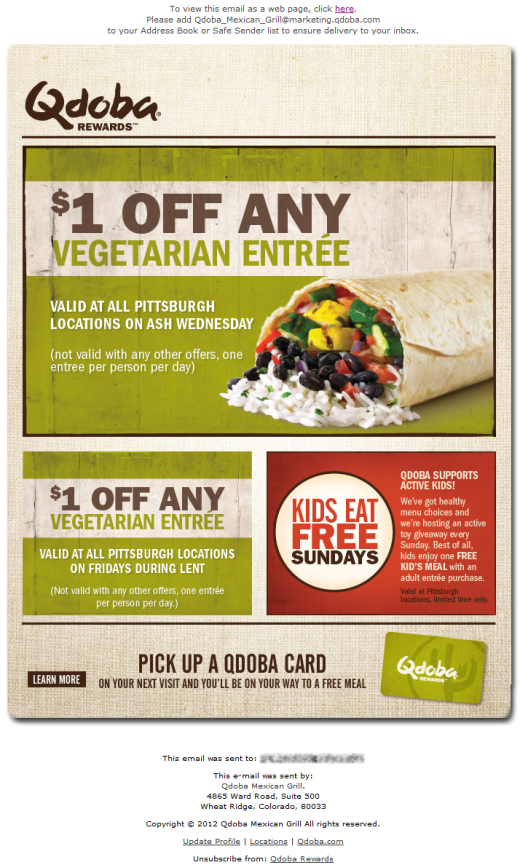 *me, and about 2 other people that I have found on the internet with a fish and/or shellfish allergy.

Shit on a shingle and cheesy scrambled eggs!
Butterscotch is goofy. She is not a people.cat most of the time, but she is my buddy.
The driveway #pumpkins are thriving. Guess Diogee dug a hole there because she knew it would be a good spot? 🤷‍♂️
Whatever this is... it's being thoroughly enjoyed by the deer. My guess is Butternut Squash or some kind if cucumber? The leaves are much smaller than all the other cucuerbits in the yard. Maybe even a decorative gourd we got some fall? Who knows?
I think I'm getting #AcornSquash, #zucchini, & #pumpkin all out of this #volunteersquash pile! Ha ha. I guess I let several tiny errant compost pile plants get out of control.
So, what's laying eggs on my #straightnecksquash leaves?
Diogee is VERY concerned about the rabbit in the yard. Look at that face.
The animals have taken over.
Outside with the puppy. This plant was yellowing from (I think) too much water but it's growing a nice little #jalapeño! Thankfully part of a few gardening FB groups so I can grab some tips here & there.
Better shots of the #SwissChard that Molly planted in school. This stuff would be great with BBQ!
Cheezesteaks with poblano and sweet banana peppers from the garden! Bethany wanted some onion from the garden on hers too. They were little, but not bad.
Finally cooked up some #SwissChard that Molly planted in school! It was good! Just cooked it in a bit of oil with some bacon pieces and garlic. Hopefully Molly's teacher would be proud.