OK, so TLC never got back to me about Missionaries Impossible (where Mormons & Jehovah’s Witnesses try to convert each other), but I will not let complete and total failure or lack of any interest in actually following up on these sorts of things keep me from writing a blog about my newest idea.

All I’d need would be a car with cameras all over it.  I could drive it around for a week and have enough footage for an entire season of shows.  All I would have to do is drive the speed limit, and obey all traffic laws… then watch everyone around be driven completely insane by that type of apparently abnormal behavior.

I see things several times a day where people are breaking traffic laws that we all read in the book from driver’s ed, things that are unsafe, or just plain aggravating; Like flags on cars, or even worse… eyelashes-on-healights aggravating.  Don’t even get me started on bicycles.

Get some people to edit it, you have a super low-cost hit.  You wouldn’t even need a narrator.  Just get some clips of Samuel L. Jackson swearing & we can edit them all in.

If we were in the movie Idiocracy (and don’t think we aren’t …really.), this would rival Ow My Balls!

Someone get on this, and send me the car and a royalty check. 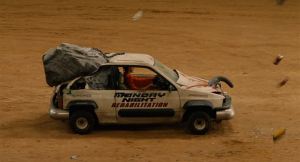