So, I’ve been hungry for meatball subs.  They’re so simple to make, but we just never seem to do it at home.  I shared the photo on social media, because I’m weird like that and it annoys people, and some people seemed to dig it.  wanted to share how easy it was with a minimal amount of effort.

#MeatballSubs make a good lunch after playing in the snow! ❄

So, the wife got a pound of ground meat from Aldi the other day, and I picked up the rest of the stuff that we didn’t already have at Giant Eagle on my way home from work.  I probably could have gotten all of this from Aldi.

So this is what I used…

And this is what I did… 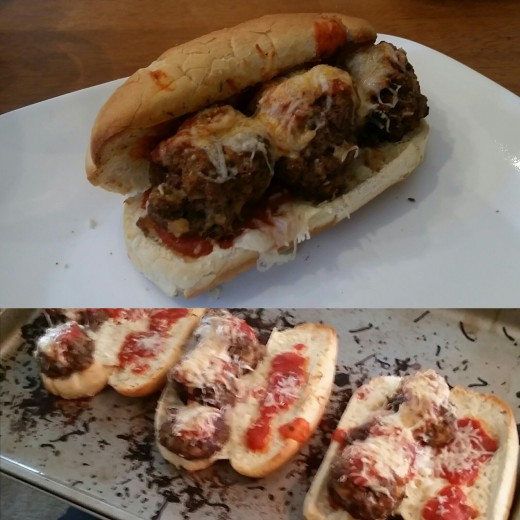 Turn the oven on first so you don’t have to worry about it later.  Put it on 375° because that’s always what they seem to say to put it on.  I don’t know why.  I don’t even know who they are.

I made some meatballs with the meat, some hand-crushed crackers, a dash of the pizza sauce, a dash of Italian dressing, a dash of whatever spices I grabbed off the rack (probably pepper, season all, onion powder, garlic powder, and paprika), a bit of the Parmesan shake cheese and the mysterious “six cheese Italian” stuff.

I put some spices on the outside because why not, and tossed them into a frying pan with EVOO and a small pat of butter on the bottom.  I pre-heated it to high, then turned it to 6 before I tossed in the balls.  6 is at about 6:00 on my stupid electric stove top.

I melted a bit of butter in the microwave.  I quickly cut open the buns, put them on a baking sheet, spread on some melted butter with a brush and added… garlic powder, onion powder, a dash of shake cheese, and “Italian seasoning” to the buns.  No Italian seasoning for my wife, and no garlic powder for my 2½ year old.  I popped them in the 375° oven on the middle rack for a bit.

I used tongs to turn the meatballs over & popped a lid on the pan.

I dumped the remaining pizza sauce into a soup cup (it was a little jar), and added a sprinkle of brown sugar.  I nuked it for 45 seconds or so.  Why?  I like sweet sauce, and grandma always said “it cuts the acid.”

I turned the meatballs on to an undone side, and got the sub rolls out of the oven.  I knew they were done because… I didn’t even look at them.  I just took them out.  They looked fine.  Plus, we’re not totally finished.  I added some pizza sauce and some of the finely shredded awkwardly named cheese to the buns.

I made sure the meatballs weren’t going to kill us with the food thermometer.  They weren’t.  I put those on the buns and added more sauce, shredded cheese, and shake cheese.

I set some meatballs aside for my 10 month old.  The sandwich was a little much for him, but he will eat just about anything you put in front of him.  Seriously.  even if it’s not edible.

I put the now built subs into the oven and cranked the knob to 400° because I am impatient and my 2½ year old kept asking if lunch was ready.  I turned the light on in the oven and watched the cheese melt.  Not only was that fun, I could also make sure I wasn’t going to burn the bejesus out of things.  I didn’t.  I took it out in time.

Well, some of the cheese that fell on to the baking sheet burned, because I made a mess.  Oh well.

These were pretty good, although next time I will use different/better sauce.  That squeeze stuff isn’t bad.  Maybe I can make a simple marinara.  Also, homemade-ish deli rolls or Cellone’s are worth it… and I would cut a little triangle out of the top like Subway used to, before we were over-saturated with them and they started to serve terrible cream-of-deathfish.

At any rate.  This is easy to do.  You could buy your own meatballs or bake your own bread or use cheese slices to make this as easy or as difficult as you like.  I cut my 2½ year old’s into 3 sections so she had sliders.  I cut my wife’s in 2.  I ate the whole thing in one big sandwich like a hungry hungry pig.  I refuse to apologize.

Share photos of yours or links to your own blogged recipe in the comments!