So this morning when trying to get to church, we had an adventure.  We cross the city to go there, because it feels like home when we do make it, and it is where I grew up going.  Generally, it’s not a bad drive on a Sunday morning.

This morning, we left a little later than we like to because… we have two small children.

I knew that there was some sort of work in the Fort Pitt Tunnel this weekend, so I decided to take the Liberty Tubes instead.  Why?  No respectful yinzer takes the posted detour, and it was going west when I wanted to go east.

No work in the tubes, or even on the Liberty Bridge… except when we got to the ramp for the Blvd. of the Allies and we couldn’t go towards Monroeville.

Up Bigelow Blvd. to Craig St. through Oakland to try to get to Forbes Ave. and get on the Parkway in Squirrel Hill, and we ran into this along the way: 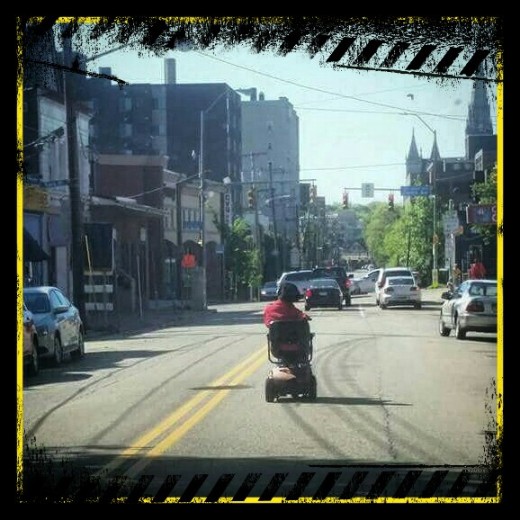 I have no idea what this was.  She was oblivious to the world around her, happily rolling down the middle of the street on her scooter with absolutely no regard for safety or traffic laws.  She eventually got on to the sidewalk, but she was rolling along at about a ½ mile per hour when I pulled up behind her.  All I could do was start a “What the…” phrase that I couldn’t finish with children in the car and laugh.  We laughed for the rest of the ride to church, and we weren’t done with the obstacles.

Apparently, Forbes was closed off right after the CMU campus for a race today.  Out & around to the Edgewood/Swissvale on-ramp to the parkway it was.

Seriously though, I know I’m not a resident of Pittsburgh proper, but I am a resident of Allegheny County.  Can we pass some sort of local ordinance that you can’t work on or around two major through-ways to the city at the same damn time?

We got there, and were only a little bit late.  The universe was testing my patience today.  I hope I passed.

Haven’t been blogging much lately, but I have a new job, am trying to get mazes done when I can, and I’ve been researching several potential purchases to help with said job online.  I will no doubt get back to blogging once things level out.

Any advice on which Epipen leg pouch I should get?  The OmaxCare™ LegBuddy™, the Allergy Essentials Epissentials™ Epipen Holder, or something else?

I finally got my prescription renewed, & got a double-pack. Thankfully I’ve never had to jab myself with one.  I did try the practice one a few times.  So, what do you do with your expired ones?  Does anyone take donations or recycle them?

Help Me Reach My Goal!

Don’t forget, I’ll be doing the FAAN Walk For Food Allergy on Sept. 16th in Pittsburgh, and I could certainly always use more donations!  I’m only about a third of the way to my goal this year, so I can certainly use some help.

I’m also always trying to figure out how to come up with cash to buy more goofy guitars, and Ernie and the Berts is writing more stuff & hoping to record ASAP.  I try to catch other local & national shows when I can.

Of course, I’m also spending time with the wife, as we have some fun stuff coming up… like weddings, hopefully the Renaissance Fair soon, the Food Allergy Walk, a camp service for church, and more.

I’m still not Kmart or McDonald’s, but I do have some blog feedback that I need to address.

I might have some more stuff asking opinions in the next few days.

So, in the wake of everything that’s just happened in Japan, and still in support of the recent events in Haiti, a local UCC cluster (and more specifically, my church: ERUCC) is collecting the contents of hygiene kits to be sent to those in need.

This year at our Wednesday Evening UCC Cluster Lenten Service we will be receiving a precious offering. In the face of natural disasters, violence, or grinding poverty, Hygiene Kits can mean the difference between sickness and health for struggling families.

To assemble a Hygiene Kit you will need:

Place all items in a one-gallon plastic bag with a zipper closure, remove excess air from bag, and seal. Please do not add toothpaste to the Hygiene Kit. Cartons of toothpaste that have an extended expiration date will be added to Hygiene Kit shipments just prior to shipment.

I personally like the fact that we can donate concrete items knowing that it will have a direct impact, and even if you can only afford to put together one kit or even part of a kit… you know that it will go directly to someone in need.

If you can get the kits to me, I’ll see that they get to the church, or you can drop them off/send them directly to:

Thanks & please spread the word!

With the pandemic shenanigans, this is Ian's 1st open house at this school. He was VERY EXCITED to show us his locker, desk, room, friends, teacher, and the school's pizza. He talked in one long uninterrupted run-on sentence between home, Penn Station for a quick dinner, and school.
So, mushroom people... is this a puffball in my front yard?
Ha. FB memories. Thanks, @laucu9!
When you get home from work at 8:00 PM for the second day in a wow and your wife has a GIANT bowl of your favorite meal hot & ready for you after you get out of the shower? 🔥🔥🔥
Daddy cooked dinner! Steak, eggs, potatoes, & Texas toast!
Well, that's certainly atypical blog traffic. 🤣
You need to know that's going into that old @kmart building? It's @burlingtondeals, not @target.
This zucchini was hiding under some big leaves next to a tree stump. Not sure if the coloring is due to lack of light, letting it grow too long, or some weird pumpkin hybrid genes.
If I ever start a solo americana/folk/alt country/cowpunk/punkgrass project, I have an album title...
I feel like if @adv.journey designed a shoe, this would be pretty close. Maybe with individual toes too.
The kids tasted & gave their thoughts on some of the peppers that we grew this year in our garden for their latest YouTube video: https://youtu.be/0sMNY58lVAQ
Cooked some potatoes, onions, and sweet Carmen Italian peppers on the grill too. Lots of butter, some spices, & in a foil pan.