If you read my recent rant about going to the movies, and then read my email to & the response from the theater, they you knew this was coming.  But, it’s cool that they’re actually here.  After the last response, I did reply via email to Mr. Wilson:

From: Eric Carroll <me@my.email.address>
To: Shawn Wilson <swilson@cinemark.com>
Sent: Thu, August 12, 2010
Subject: Re: Contact Us: Quality of service at a theatre

Thank you for the reply.  I understand that you must also be frustrated with the behavior of your patrons.  My wife & I would very much appreciate two movie passes, thank you for the offer!  My mailing address is…

You do have a great new beautiful theater… hopefully over time, you’ll be able to have the staff available to spot & weed-out the troublemakers.  Ha… too bad that texting is one of the bans… I’d certainly have no trouble texting the theater to point out moviegoers causing a distraction for others!

And, then today, this was in my mailbox when I got home: 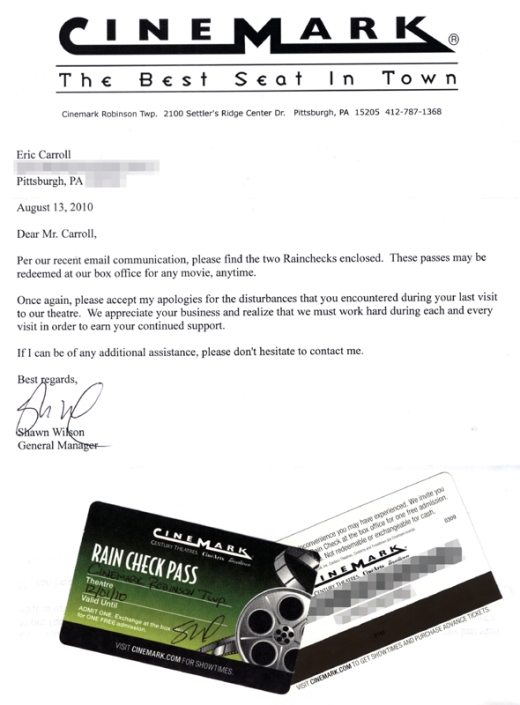 It’s cool that it can be used for any movie any time.  I had wondered if there would be any odd restrictions. I am serious abut the texting to report troublemakers though.  If there was a “text complaints to this # to alert managers of a disturbance/error during the film” kind of thing… it would work out pretty well… except that texting during to movie is one of those things that’s already frowned upon.  They need those buttons like they have at the bowling alley… ha ha.

At any rate, we’ll have to get back out there soon to catch a free show!

So, did you read the one about our last trip to the movies?  I know it garnered more comments than most of my posts.  Comments are always appreciated!  At any rate, we have somewhat of a conclusion.  I let the theater know about our evening via webform:

I my wife & I recently went to the new Cinemark in Robinson on a whim, and we had an “interesting” evening.  I posted a review of the night online, and it was brought to my attention that I ought to tell you guys about the problem directly.

More and more, a night at the movies plays out like this:  https://aixelsyd13.wordpress.com/2010/08/07/movie-night-for-schmucks/

It’s a shame to have a new beautiful theater with helpful friendly employees go downhill so fast thanks to the rudeness of the patrons, and refusal of management to enforce the theater’s policies.

Should I have gone to management right away?  I would have most certainly missed the beginning of the film.

I hope that you are able to read about my experience and share your thoughts on how I should have conducted myself in that situation.

Thank you for your time, I really look forward to hearing from you!

And, I eventually got a reply:

Thank you for visiting our theatre and for contacting us concerning your recent visit.  I sincerely apologize that your visit was less than enjoyable.

It is certainly our goal to provide the best overall movie-going experience.  We strive to make personal contact with each one of our guests.  It may be saying hello as our guests walk in, holding open a door, carrying concession items, or greeting guests as they exit the auditoriums.  I am extremely pleased that our staff was able to have contact with you and your wife on several occasions.

I can fully understand that the positives associated with a nice theatre and a friendly staff can soon be replaced with frustration when the movie is made less than enjoyable because of the actions of fellow guests in the auditorium.  Unfortunately, it seems now-a-days, some of the public has become very inconsiderate of others.  We can’t change the way people act, but we can have our staff continue to do regular checks of each auditorium and we will correct any problem or disturbance noticed.  I apologize that we were not able to identify and correct the disturbances that you experienced.  I will review this instance with my team.

Thank you, again, for contacting us.  I am disappointed that your visit to our theatre was not perfect.  It would be my pleasure to invite you and your wife back, as our guest, for a much better experience.  If you would be so kind as to provide me with your mailing address, I will place two passes in the mail.

If I can be of any additional assistance, please don’t hesitate to contact me.

Well, at least I got some free movie passes!  It’ll be interesting to see if there are any restrictions on them as far as times or anything.  But hey… a free movie isn’t a bad deal.  Maybe I’ll avoid a weekend night so we don’t get a repeat of being surrounded by idiots.

It is cool that he acknowledged the problem and apologized for the situation, even if he had to concede that there’s really nothing that he can do about it.  Hopefully the staff for that evening gets commended for being personable.

So My wife & I saw Dinner for Schmucks last night.  Great movie, had some really funny parts.  This blog really isn’t about the movie though… more the experience.

I hate going to the theater more & more.  We were out & about in Robinson & decided to hit up the new Cinemark theater.

On the other end… people were filing in up until the very second it started, acting appalled that some people had arrived on time & they couldn’t find the seat they wanted.  All of the “good” spots had been taken by then… of course the front few rows (as always) were empty, but no one wanted to sit there.  We had to suffer a host of  “excuse me”, “sorry”, and “can I get through?” during the pre-movie commercials and previews.  If I owned a theater –  once the previews started, there would be no entry.  You should have gotten there on time, and taken into consideration time to get food or pee or whatever else you need to do before going in to see a movie.

Of course, seconds before the movie began… Immediately to my right, sat an older woman who smelled like she had just sampled every perfume in the mall.  She kept putting her arm on top of mine on the arm rest, and making an audible “uh” of disgust when I didn’t relinquish my claim.  As I stated before, I got there (admittedly) insanely early to lay my claim to my seat… including the arm rest that I paid $9 for, that’s also holding my overpriced half Coke/half blue-whatever-it-was ICEE in the cup holder.

The woman who’s mouth was as loud as her stench opened & munched quite audibly on a smuggled can of Pringles.  I don’t mean the little cans that you can buy at Sheetz.  This was a giant full-sized can of Pringles.  I don’t want to know where she was hiding it.Then came the 20 oz. bottle of Diet Coke, opened with a deafening fizz, and guzzled like she hadn’t drank anything for days.  Her daughter/friend/whatever had a crinkling bag of freaking chips.

When I put my hand in the air with a “WTF?” look on my face and simply said “Really?” to Bethany, she just laughed and shook her head in amazement.  The previously loud olfactory-challenged woman attempted to mutter a “get over it” and went on munching and gulping away like she was a pig at her trough.

I get that the theater food is way-overpriced, and it’s joked about to a cliché level any time the subject is brought up.  But here’s the thing… it’s part of the overall experience.  Either suck it up & get it, or just pass.  Do you really need to munch on Pringles during the movie?

To Bethany’s left we had two guys in their late-teens or early 20’s who were the texting-during-the-movie dunderheads.  They repeated unfunny lines as if they were funny & laughed and kept asking each other what they missed because they were texting.  I wonder how someone makes it through life when they’re at this level of intelligence.

At the beginning of the movie, there was the Sprint commercial that reminded you that movies don’t interrupt your phone calls, so you shouldn’t interrupt the movie.  There were also at least two other theater-generated messages that ask you not to talk, answer your phone, or text during the movie… and even asking you to tun the phone off, or at least silence it.

I had even remarked before the film how it’s sad that Cinemark feels the need to do that.  The only problem is that it doesn’t work on the people for whom it’s intended.  They don’t care anyway.  Apparently, rules don’t apply to them. These are the same people who park in handicapped spots or over yellow cross-hatch lines.  They’re the same people who throw non-recyclables in to the recycling bin (I have an issue with recycling and it’s overall energy waste/consumption in general, but I’m not an ass).  These are the people that don’t return the carts.  They talk on their phones holding up the line at Quiznos.  They don’t double-flush the public toilet after taking a disastrous dump.

I could have gone to theater management and complained… but another remarkable thing about the theater was that we passed two guys in suits & managerial name tags while getting into the concession line, neither of them once looked in our direction or welcomed us into the theater.  Everyone else was quite friendly.  The girl who rang us up at the concession stand remarked about my amusing Dead from Lobster T-shirt.  The one kid who was sweeping up the hallway even opened to door for Bethany as she went to the restroom.  I think the same kid told us to have a good night as we exited the auditorium.

What would management have done in this case?  Would they have thrown out the people on either side of us?  I doubt it.  They were all also paying customers.  Would I have missed the beginning of the movie that I just paid to see?  Undoubtedly.

What would the solution have been here?  Perhaps they need to better police for outside snacks and glaring cell-phone screens.  Maybe you need searched before entry like a ball-park, or like an old saloon where you check weapons at the door… so must cell-phones be relinquished.  In the case of the woman beside me, they’d need her to also pass a test from that smell-detector machine I saw on CSI once.

I think I’d even pay more of my hard-earned money to go to a theater where they would weed out the schmucks.