Today there was a nice little squishy bubble pack in the mailbox when I got home.  It had my name on it and appeared to be from Arby’s again.  More neat stuff from Arby’s?  What could it be?  A hat?  A T-shirt?  An oven mitt that talks like Tom Arnold when you press a button?  (Actually, that would be pretty neat.)

Nope, this was a different kind of squishy.  I got a post card from a Cherelle Flowers at Arby’s HQ in Atlanta.  Cherelle apparently works in Arby’s Customer Relations but doesn’t communicate with Arby’s President Hala Moddelmog who just sent me an entire case of Bronco Berry Sauce.  In with the postcard where several leaking square packets of Bronco Berry Sauce: 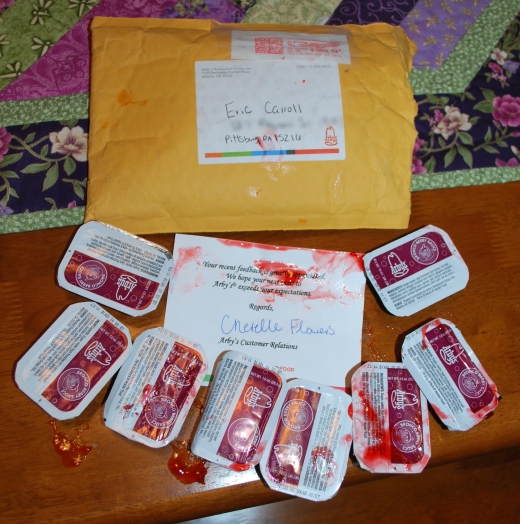 It's a Bronco Berry Bloodbath!

I hope it wasn’t intentional.  It’s like a mini version of the horse-head scene in The Godfather.  I mean, the card is sort of impersonal, but the gesture is nice when the sentiment isn’t stained with blood red not-really-berry sauce.  It’s unsettling to open such a package.  It almost looks like a threat. 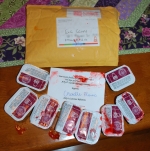 I promise to wrap it better than my last gift from Arby’s if I need to mail it to you.

I’m guessing that given Arby’s’ track record, it’s not a threat and it’s yet another genuine attempt to keep a goofy customer happy.  I have no idea if this generated from their web contact form, or Twitter, or what.  I would have maybe liked a more personal letter (again like the incredible one from Ms. Moddlemog), and the United States Postal Service to have handled my package with more care.  Ha.  Handled my package.  But, I’ll settle for free stuff… even if there are only 2 unmolested packets.

I did notice it was addressed to me, and not Bronco Jalapeño.  I also noticed that these packets are rectangular… where the other ones are circles.  Clearly, there is more than one source for Bronco Berry Sauce.  Where is it my friends?  Can I find it?  Can I buy direct?  Can I get the recipe?

I need a job where I can reply to goofy emails all day, and send people cool free swag… or gooey free swag.

So, what do you think of this effort?  I have scored many awesome freebies, but I still don’t have jalapeño bites being served at Arby’s in Pittsburgh.  Is this a fail?  Do we still need a protest song?

Should I complain to the post office about this?

If you have no idea what’s going on, check out these posts:

In other news, I think I have an idea for a contest where the winner can get some Bronco Berry Sauce.  Stay tuned for details!